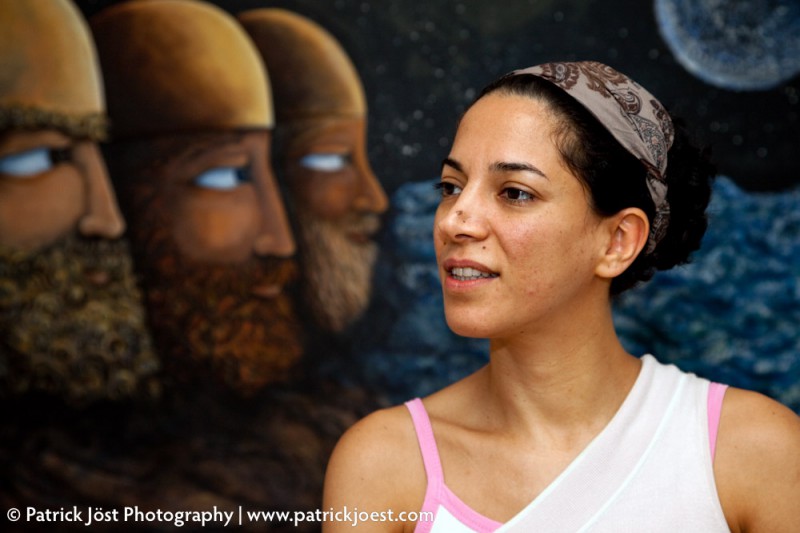 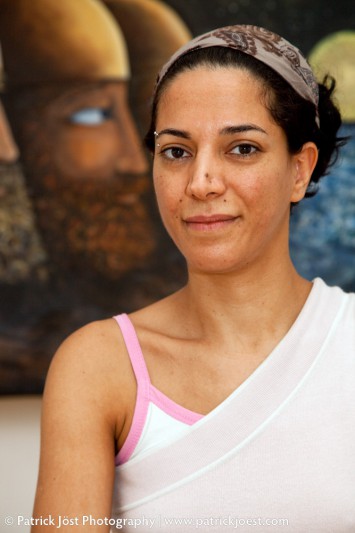 Recently, while attending an exhibit at Gracia Arts Project, ´Relatos de Babilonia,´ I found myself captivated by the works of Iranian artist Zahra Alma Ghassemino. These paintings of figures fused with Persian poetry have depth and personality; and though the viewer may not necessarily understand the Farsi script incorporated into the paintings, the intention can be felt and understood on an emotional level. Zahra is a woman who focuses on humanity, not nationality, the result being paintings that tell stories about her, about people, about humanity. She believes in human beings above their place of origin. This is what makes her art successful. She has an overwhelming desire to communicate, something that is lacking in a lot of contemporary art. She is not self-absorbed, like so many artists, making the viewer do all the work to understand the piece. Instead, she creates paintings that speak on a level that is relatible to a wide range of individuals. She is above all a communicator, concerned with how she can relate and express herself, without alienating her public.

The poems Zahra incorporates into her paintings are from Persian mysticists and poets such as Jalāl ad-Dīn Muḥammad Rūmī, Omar Khayyám, and Shams-e Tabrizi. Growing up during a revolution and war, Zahra expresses that she is very influenced by the past and that in Persian society during those hard times “the poem could camouflage the sadness and the absent of security” that people felt. Poetry offered a distraction, nourishing the soul. The fusion of the written word with images in Zahra´s work is very natural, given that poetry has always been a part of her life. Surprisingly, it is only in the past year that Zahra has begun to incorporate typography into her work. And as anything she does, it has been well thought out and researched beforehand. The content and form she uses delicately interweaves the past and present. The complexity of these ideas showcase her talent, merging together Eastern and Western thought, as well as Iran´s past and her present in Barcelona.

Zahra is very thorough in her artistic practice, in fact she is a perfectionist: doing various general and brief sketches, studying those sketches, doing another round of sketches and a color proof before beginning to paint. Zahra´s style is solid and recognizable, shaped since she began painting at the age of 13. She studied at Hojatallah Shakiba, later going on to study at various Institutes of Plastic Arts, being influenced by Persian miniatures. In addition to her artistic endeavors, Zahra also studied Spanish in a private university and later went on to do a masters in Hispanic Culture at the University of Barcelona. She has a deep understanding of her culture, as well as the one she lives in now, focusing on the human factor that brings us together, rather than nationalities that can often tear us apart from one another. She paints from the heart.

Zahra is not only an amazing artist, but also an incredibly intelligent, positive and charming woman. Barcelona allows her to express herself, not restricted by the censorship she had as an artist in Iran. In 1999, the artist collective aMARRON accepted her as a refugee; and she has been studying, working and living in Barcelona ever since. Here, Zahra has real dialogue with the viewer, as opposed to Iran, where she says during her exhibit she only experienced SILENCE from the viewers. In Barcelona, she is able to talk and connect with people. She realizes the importance of learning from other individuals, talking to them and letting these influences breathe in her art and life. She also has an openness that allows it to let her soul grow and become a better person. A claim which is very evident. She is an easily approachable character, delighted to chat with anyone and is genuinely happy to hear when someone is interested in her work. That she manages to pull all theses aspects into her work is extraordinary.